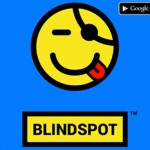 If you’ve traveled on the Ayalon Highway recently, you’ve certainly noticed the big winking smiley icon with its tong sticking out on a huge billboard. That’s the logo of a new App, “Blindspot,” which allows users to send instant anonymous messages and is among the most popular Apps in the market.

Parents who saw this billboard and understood that it advertises an anonymous messaging service, also understood the grave potential it has because it allows children and teenagers to send without complication to their friends every message they desire, without the risk of having these messages traced back to them.

In light of the App’s serious potential, a protest is already growing on social media, calling for parents to get involved and forbid their children from downloading the App. “Parents, take note of this App. Why is it good? Mostly to bother, humiliate, threaten or embarrass a peer without having to take responsibility,” wrote Ali Wesberet, a worried parent, on his Facebook page. His post has already received a couple of thousand shares.

“This cute smiley is an open channel for humiliation. A door wide open for cruelty. It really doesn’t matter if your child will be the offender or the victim. Both options are equally bad. We must not allow inexperienced children to have such power,” he warned.

“This App is dangerous,” wrote one person who replied to Wesberet’s post. Another wrote: “It’s especially dangerous because today children are humiliated and torn apart all the time on social media. So now they can do it anonymously?”

A mother who read about the App wrote: “Why should we give children the option to harm others anonymously?”

The founders of the App, Dor Refaeli, and Lee Greenberg, backed by Shellanoo Group, defined the App as: “A fun App for having conversations and allows people to be real with one another.” They also stressed that everyone has the option to block users that have sent them messages that disagree with them, if they wish.

“Blindspot” added in response to the protest against it: “Every user can block incoming messages with the push of a button. If only in real life we could do that to people we didn’t like around us. The posts aren’t public and we take precautions within the App. This is not the first anonymous App and it’s certainly not the only one.”