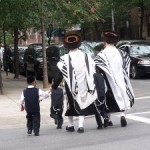 Rabbi Hyman Steinberg, 82, was rushing to his shul one night in bad weather when Simon Martins, 24, hit him on the road.

Martins admitted causing death by driving without due care and attention and got an eight-month suspended jail sentence, but his defense lawyer, Nick Freeman, known as ‘Mr Loophole,’ couldn’t let it go.

After the case at Manchester Crown Court, the lawyer tried to shift the blame to the deceased rabbi: “Had Mr. Steinberg been wearing something reflective, this tragic collision might well have been averted.”

“Sadly, because he was invisible, Mr. Steinberg has lost his life,” the lawyer claimed. “His family are left distraught, the community has been robbed of a much loved and respected rabbi and a young man must now live with the guilt for the rest his life.”

Then he called for the British government to create a law to compel pedestrians to wear lights.

“The time has now come for the Government to require pedestrians to effectively light up at night,” the lawyer said.

“We are now living in hardpressed economic times, when councils are saving money by switching off street lights at night,” he said. “I’m not suggesting everyone must wear a hi-vis jacket – but something reflective that would give them a visible presence, such as a vest, arm bands or belt. Pedestrians, motorists and cyclists all share road space and in my view must assume responsibility for their visibility.”

The lawyer’s pronouncement oddly coincided with the start of Shavuos. To celebrate, many Jews begin study sessions in the dark of night – some at midnight – going until sunrise, when at least, according to Mr. Loophole, it would be safe for Jews to walk to shul.