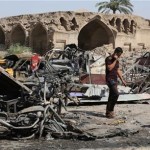 “There is a specific unit on the organization charts of ISIS for external attacks, for planning and carrying out attacks in Western Europe and in the United States,” said Richard Clarke, a former White House counter-terrorism advisor. Recently, the terror group appears to be embarking on “complicated, commanded and controlled multi-actor” external operations.

Witnesses at the Bataclan concert hall in Paris said the gunmen talked about Iraq and Syria in the midst of the carnage. At least one of the attackers is suspected of having come into Europe as a refugee from Syria or gotten ahold of a refugee’s passport.