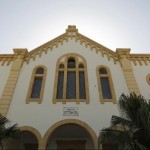 A promising story of religious cooperation in the Middle East may seem unlikely at the end of a summer of sectarian violence across the region. But a Lebanese project to rebuild its one and only shul project offers a tiny glimmer of optimism.

Beirut’s Maghen Abraham shul was originally built in 1925 to serve the city’s centuries-old Jewish quarter. The Jewish community in Lebanon has a long and vibrant history, once providing sanctuary to Jews fleeing the Spanish Inquisition in the 15th century, and continuing to grow in the 1940s as it absorbed refugees from Nazi Europe. By the 1960s, up to 22,000 Jews were integrated into Lebanese society, with Judaism counted among the country’s 18 officially recognized groups.

When sectarian tensions erupted into civil war in 1975, however, many Jews left for Europe and the Americas. The central location of the Jewish quarter, trapped between the Christian and Muslim sections of a divided Beirut, made it a key battleground in a war that pitted dozens of militias against one another and wrought unfathomable destruction across the entire country. When Israel invaded Lebanon in 1982, its forces shelled the Jewish quarter while fighting the Palestine Liberation Organization (PLO), blowing a gaping hole in the roof of the Maghen Abraham.

For the next 27 years, both the Lebanese Jewish community and the shul that had formed its religious heart lay in ruins.

The Lebanese government approved the shul’s reconstruction in 2009 with the support of all political parties, including the militant Hezbollah movement. The project, costing hundreds of thousands of dollars, has mostly been funded by private donations from Jewish funders both in Lebanon and abroad, including some of those Lebanese Jews who left during the civil war.

The Lebanese Jewish Community Council shared photos last week on its Facebook page showing the interior of the Magen Abraham as it nears completion, along with a hopeful message for religious pluralism in Lebanon, which it refers to as “the last refuge for the minorities of the Middle East.”

The reconstruction effort has largely been organized by Isaac Arazi, a self-appointed leader of the Lebanese Jewish community. Arazi has said that he hopes to help rebuild the dwindling Jewish community of Lebanon, which now numbers around 200 people, in addition to the shul itself.