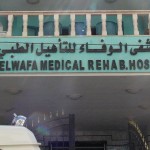 After days of incessant terrorist gunfire emanating from the Waffa hospital the IDF had responded today.

For days terrorists have been using the Waffa hospital in Gaza as a military post. Terrorist have been firing small-arms fire and anti-tank rockets at IDF forces. The IDF has refrained from responding. Furthermore, the lower levels of the hospital are being used by terror organizations as a command and control center.

The IDF’s Coordinator of Government Activities in the Territories (COGAT) approached several international Palestinian organizations on the issue more than once and contacted the hospital Director as well, but to no avail.

Today, the fire intensified, and the IDF finally decided to respond. The IAF attacked the hospital complex with accurate fire.