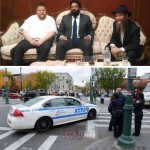 Crown Heights, Brooklyn – Following a number of violent incidents in the Crown Heights neighborhood, the local leadership has reached out to Mayor Bill de Blasio for support.

On Thursday, a 9-year-old Jewish boy who was riding a bike on the corner of President St. and Troy Avenue at approximately 4:00 pm was attacked by a group of 4 teenage black males, one of whom struck him in the head. He did not sustain any injuries.

On Wednesday, a 24-year-old Jewish man was attacked by three male black teenagers at the corner of Albany Avenue and Union Street at about 11:40 p.m., one of whom punched him in the face, knocking him to the sidewalk, police said.

Residents complained that Shmira volunteers had chased down a group of teens they believed to be the attackers in Wednesday’s incident, but local police officers had quickly released them.

In response, Marco Carrion, Commissioner of the Mayor’s Community Affairs Unit, made a midnight visit to Crown Heights Thursday.

Community representatives Eli Cohen and Chanina Sperlin of the Crown Heights Jewish Community Council requested that the mayor send a clear message of support to the police department and provide them with the necessary resources to address recent violence against Crown Heights residents.

The commissioner assured the community that he and the Mayor were available in case of any further concerns, a participant told COLlive.

The commissioner also said that he had spoken with the 71st Precinct Commander George Fitzgibbon, and was satisfied that the initial poor response to Wednesday night’s attack has been properly addressed by the precinct and would not be repeated in the future.