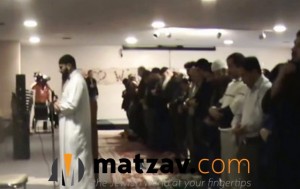 In Canada, congregants of a mosque that was set on fire paryed in a nearby Reform synagogue.

The Masjid al-Salaam mosque, which is the only one in Peterborough, Ontario, was set ablaze the day after the Paris attacks, on November 14. Someone had thrown a Molotov cocktail at the building.

Following this incident, the leaders of the city’s only synagogue, the Reform Beth Israel, offered to host the mosque’s congregants, so that they would have somewhere to pray. “We live in a small town and they are our neighbors, so it seemed only natural to welcome them,” says the synagogue’s president, Larry Gillman.

On a recent Friday, about 150 Muslims went to pray at Beth Israel.

Kenzu Abdella is the president of the Kawartha Muslim Religious Association (KMRA), which runs the mosque.

“This is the first time the mosque has been attacked,” he said. “We are shocked and find this very worrisome. However, we have received an outpouring of support. The city authorities, the synagogue and several churches all offered us spaces in which to continue our activities.

“When Larry Gillman invited us to the synagogue, I first wondered how we would organize the prayer, since we need rugs, we need to pray in a certain direction, etc. We ended up praying in a room on the first floor and it went very well, thanks to the people who run the synagogue. We’re very grateful.

“After the prayer, we held our annual dinner at the synagogue. But this time, we cooked a vegetarian dinner in order not to go against the customs of the synagogue (where kosher meals are served).”

“This was an occasion for the two communities to get to know each other better and to start a dialogue. I think that’s the best way to combat radicalism and hate.

“During the dinner we shared on Friday, there were about 80 Muslim congregants and 15 Jewish ones. We talked about all sorts of things, and realised we had a lot in common.

“For example, many words in Hebrew and in Arabic share the same root. Since we have a big kitchen at the synagogue, the Muslim congregants suggested we might organise cooking classes together in the future.”

See below for a video of the mosque members praying at the synagogue: