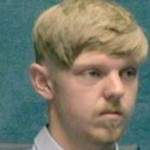 The pair have been missing for more than two weeks after Couch, who was convicted of intoxicated manslaughter, failed to report to his probation officer.