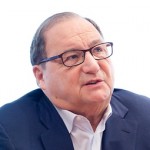 The controversy surrounding Prime Minister Bibi Netanyahu’s planned speech to Congress might have reached its peak withthe director of the Anti-Defamation League Abraham Foxman, calling on the Israeli prime minister to stay home on Friday.

Foxman told the Forward on Friday that the political uproar that has ignited because of Netanyahu’s speech has caused the situation to spiral out of control and therefore the speech will now be unhelpful.

After the topic of Netanyahu’s speech reached the limelight and became the bud for a joke on Jon Stewart’s The Daily Show, Foxman told the Forward that “it turned the whole thing into a circus.

“One needs to restart and it needs a mature adult statement that this was not what we intended,” said Foxman to the Forward.

According to Foxman, going ahead with the speech would be counter-productive now that all the attention has been given to the political controversy rather than the issue Netanyahu intends to discuss – Iran.

“It has been hijacked by politics,” said Foxman to the Forward. “Now is a time to recalibrate, restart and find a new platform and new timing to take away the distractions.”

Although Foxman is calling for Netanyahu to cancel his speech on Iran, Foxman said that he does not disagree about the seriousness of the Iranian nuclear issue and agrees with Netanyahu on the need to strengthen sanctions against Iran.

Foxman offered alternatives to the planned speech, such as for Netanyahu to come to Washington only for the AIPAC conference and postpone his address until after the elections or relay his concerns about Iran in direct conversations, according to the Forward. Read more at Ynet.