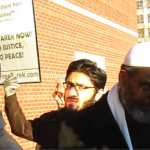 The Anti-Defamation League (ADL) is being scrutinized over the alleged ties staffers at its interfaith camp in New Hampshire have to a convicted Al-Qaeda terrorist.

Charles Jacobs and Ilya Feoktistov of the Boston-based advocacy group Americans for Peace and Tolerance (APT) wrote in an article for American Thinker that brothers Bilal and Ammaar Mirza-who have been involved with the ADL’s New Hampshire camp for several years, first as campers and later as staffers-have been “active in a Boston-area extremist Islamist movement” and are also supporters of convicted Al-Qaeda terrorist Tarek Mehanna.

Mehanna, a pharmacist from Sudbury, Mass., was convicted of conspiracy to provide material support to al-Qaeda in 2012. Jacobs and Feoktistov wrote that Bilal and Ammaar have been frequently seen “taking active part in multiple rallies organized by the so-called ‘Free Tarek’ movement,” also noting that several members of that movement have been tied to anti-Semitic statements in online postings with titles such as “Close Guantanamo Bay, Reopen Auschwitz.”

Jacobs, APT’s president, called on the ADL to improve its vetting process for interfaith partners.