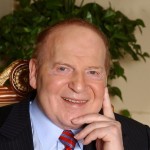 While the mega donor didn’t disclose his degree of backing for the front-runner in the race for the Republican nomination, he did say he found Trump to be “very charming” and called his standing in the crowded candidate field “unheard of.”

“It was very nice,” the gambling tycoon told Reuters in a rare interview in Macau when asked if he had met Trump, who leads in opinion polls of Republican voters. “He was very charming.”

Hours later, Trump returned the compliment to Adelson, telling Reuters, “Sheldon and I have been friends for a long time. He is an amazing man. I am the only one who doesn’t need his money. But I would love his support.”

On the subject of Israel, Trump added, “Sheldon knows that nobody will be more loyal to Israel than Donald Trump.”

The meeting and Trump’s pro-Israel stance – coming after more ambiguous remarks a few weeks ago – could pave the way for a deeper relationship between the two men, a month and a half before the first Republican nominating contest in Iowa.