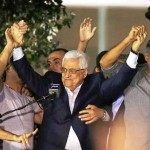 Palestinian leader Mahmoud Abbas said in an interview this past weekend that he would like to have American-led NATO forces indefinitely patrol a future Palestinian state.

He also said Israeli soldiers could remain in the West Bank for five years, up from his previous offer of three years. His more diplomatic terms come on a weekend of elevated tensions between the U.S. and Israel, after Secretary of State John Kerry said, “There are talks of boycotts and other kinds of things” because of an “increasing de-legitimization campaign.”

Israeli Prime Minister Bibi Netanyahu responded, saying, “Attempts to impose a boycott on the state of Israel are immoral and unjust. Moreover, they will not achieve their goal.” Read more.