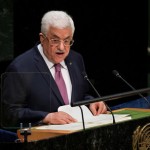 Israel questioned Palestinian Authority (PA) President Mahmoud Abbas’s ability to be a true partner for peace after Abbas accused Israel of “genocide” against the Palestinians in his United Nations General Assembly speech on Friday.

Abbas said Israel committed “absolute war crimes carried out before the eyes and ears of the entire world” during this summer’s war with Hamas in Gaza, and called on the U.N. to pass a resolution setting a deadline for Israeli withdrawal to pre-1967 borders.

This summer’s war “came after long, difficult [U.S.-brokered Israeli-Palestinian] negotiations for more than eight months,” Abbas said, adding that Israel “did not miss the opportunity to undermine the chance for peace.”

Abbas “complements Hamas by perpetrating political terror and making false accusations against Israel. … As long as Abu Mazen (Abbas) chairs the Palestinian Authority, he will perpetuate the conflict,” Israeli Foreign Minister Avigdor Lieberman said in reaction to the speech.

U.S. State Department spokeswoman Jen Psaki said, “President Abbas’s speech today included offensive characterizations that were deeply disappointing and which we reject. Such provocative statements are counterproductive and undermine efforts to create a positive atmosphere and restore trust between [Israel and the Palestinians].”