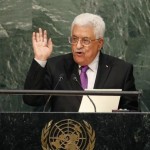 PA President Mahmoud Abbas has publicly confirmed for the first time that he turned down a peace offer by Israeli Prime Minister Ehud Olmert in 2008 that would have provided for an independent Palestinian state containing all of the Gaza Strip, much of the West Bank (with land swaps), and a tunnel connecting the two areas.

In an interview on Israel Channel 10, reporter Raviv Drucker asked Abbas: “In the map that Olmert presented you, Israel would annex 6.3% [of the West Bank] and compensate the Palestinians with 5.8% [taken from pre-1967 Israel]. What did you propose in return?”

“I did not agree,” Abbas replied. “I rejected it out of hand.”