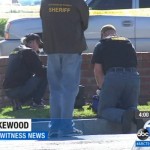 An hours-old baby girl was found early Sunday in Lakewood, California, after a homeless man on a bike heard her cries. The man brought the baby to a fire station, where she was found to be in healthy condition. Police say a woman claiming to have witnessed the birth and to have helped the mother is, in fact, herself the mother.

The 35-year-old woman approached investigators and said she helped cut the umbilical cord during the delivery.

“When she stood up from her seat there was blood on her chair,” said Deputy Mike Barraza of the Los Angeles County Sheriff’s Information Bureau. “At the hospital, the examining physician concluded she recently gave birth because the placenta and partial umbilical cord were still inside of her.” Read more at ABC News.