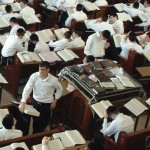 [Comunicated] Gedolei Yisrael have launched a revolutionary campaign, called Share in Torah, uniting 326 kollels and yeshivas from across Eretz Yisrael in a fundraising initiative representing all communities─ Litvish and Chassidish, Ashkenazi and Sefardi. The goal: to strengthen Torah learning in Eretz Hakodesh.

“Essentially, we’ve created the world’s biggest yeshiva, comprising 30,000 students representing all of Klal Yisrael,” says founder and Jerusalem Deputy Mayor Rav Yitzchak Pindrus. “Every Jew around the world can partner in the Torah of 30,000 people who are sitting and learning in Eretz Yisrael.”

The idea is as simple as it is revolutionary. Instead of every small and middle-sized yeshivah sending a representative abroad to raise the 40 percent of its budget that isn’t covered by government funding and tuition, hundreds of yeshivas pool together and work through one centralized fundraising arm. Member institutions pay NIS 10 ($2.50) per student per month to cover expenses and then divide all proceeds proportionately, based on the number of students.

The only criterion for joining is that bochurim and avreichim learn Torah a full day. The partnership represents all of Am Yisrael under one ‘financial roof’ – with institutions from as south as Eilat and as north as Metullah.

Under guidance from leading gedolim including Harav Shalom Cohen, Harav Shmuel Leizer Stern, and the son of Harav Chaim Kanievsky, Share in Torah seeks to ease the burden on smaller Torah institutions, particularly those without foreign benefactors or an established alumni network. These are the institutions struggling most over the last couple of years, as government subsidies to yeshivas have been slashed and parents’ child-allocation payments have been decimated, making it much more difficult to collect tuition.

Rav Pindrus, former mayor of Beitar Ilit, explained, “Before this new [government] coalition, we were only getting 15% of our budgets covered by the government, compared to 85% that secular schools get at comparable grade levels. Assuming that the new budget passes – which we won’t know until the end of the 2015 calendar year – we’ll be getting 30 percent, maybe 35%. True, that’s a significant increase. But it still leaves the yeshivas with 65-70 percent of their budgets to raise.”

Rav Harav Meir Zakbach, a senior official at Yeshivas Pe’er Moshe in Petach Tikvah, said the situation has gotten particularly trying. “We get NIS 200 ($50) a month per student,” Rav Zakbach said incredulously. “That is supposed to cover three meals a day, their Rabbis, dorm counsellors, electric bills for dorm rooms that all have air conditioners.” Yeshivas Pe’er Moshe was founded over 30 years ago by Harav Moshe Pinto as a Sefardi yeshiva attracting students from across Israel, many of whom come from poor, secular homes.

“It’s impossible to ask [parents] for much,” he said. “They don’t have the means. Their socio-economic standing is very, very low. Besides, many of them are not religious and if you push them too hard on tuition, they’ll simply pull the kids. And we can’t have that.”

With Share in Torah, this yeshiva and hundreds more can benefit from unified support. They simply will not have to worry about funding and can continue teaching Torah. In our merit.

“Every Jew around the world can partner in the Torah of 30,000 people who are sitting and learning in Eretz Yisrael, each in accordance with his ability to give,” said Rav Pindrus. “It could be $500 a year, $1,000 a year, $10,000, and they all have a share in Toras Eretz Yisrael. Torah learning everywhere is important, but Gedolei Yisrael have taught us that Toras Eretz Yisrael is unique.”

Join the revolution in supporting Am Yisrael’s most important industry.