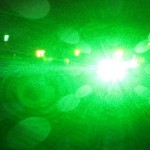 Travel on some of Israel’s main highways has become increasingly hazardous as Israelis have been subjected to daily rock-throwing attacks. But there is a new threat plaguing Israel’s roads, turning vehicles into tools of terror. The phenomenon is not as well known as the frequent car ramming attacks and stone-throwings but it can be just as deadly: lasers.

Tazpit Press Service recently interviewed Noa Sofer-Magid, who established a Whatsapp security notification network for drivers frequently using Route 443, the main highway which connects Tel Aviv to Yerushalayim via the city of Modi’in. The highway has seen its share of terror attacks the past year, with frequent rock-throwing attacks, shootings, stabbings and other forms of terror.

Sofer-Magid, a frequent driver on the route, manages the network of Whatsapp groups which includes emergency responders, security personnel and the general public, who notify one another through the messaging app of security incidents on the highway.

Sofer-Magid related to TPS that terrorists have been frequently making use of blue and green lasers to cause car crashes, especially at night.

“To understand the strength of the blue laser, think about the fact that if you shine a green laser on a piece of paper only ten meters away, the paper will burn,” Noa told TPS.

She explained that the blue and green lasers, which are the type of lasers often used, can also cause permanent eye damage. The blue laser has a beam 300 times stronger than that of the green laser and it can cause immediate permanent blindness.

Sofer-Magid called for a more proactive and serious approach by the government in light of the fact that the laser attacks, which take place on Route 443, Route 458, and other roads in Judea and Samaria, are meant to cause fatal crashes.

“The government has been taking a wait-and-see approach. But, in the last few months, civilians have stopped saying that they will sit and wait until they’re targeted. They are making noise and they want to talk about this. This problem would not exist had sufficient deterrence measures been in place.”

Noa expressed concern about the challenge of creating preventative measures even though the perpetrators of attacks are usually caught.

“One of the worst things that can happen to us is that we stop using our roads, especially Route 443, which is a central road to the capital, Jerusalem,” she said.

“The day we stop using this road is the day we can pack up our belongings and leave. We cannot stop using it. The military is on the road and there are observation posts, but if we give the terrorists what they want, they’ll be inside Modi’in and Tel Aviv.” [Tazpit News Agency]