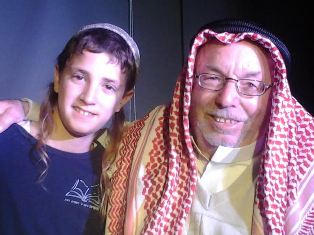 A year since the passing of peace activist and settler Rabbi Menachem Froman, his wife, Hadassah and close family friend, Sheikh Ibrahim Abu El-Hawa, a Palestinian Muslim, recently paid public tribute to the man who was well-known for his unique peace activities in the region.

Rabbi Froman served as the rabbi of the Tekoa community in the northern Judean hills. He was a leader in interfaith dialogue between Jewish settlers and Palestinians, while also successfully reaching out to Palestinian religious and political leaders. Rabbi Froman passed away from colon cancer on March 4, 2013 at age 68.

Since then his family has continued his legacy of fostering dialogue through religion and faith with Palestinians.

On Saturday night, March 8, Rabbi Froman’s wife and his son Shivi, led an evening filled with stories and prayers in the spirit of the late rabbi, together with Sheikh Ibrahim Abu El-Hawa – with an audience made up of family, friends and followers from across the Israeli political spectrum in Petah Tikva.

Sheikh Ibrahim Abu El-Hawa, known to Rabbi Froman’s family simply as Ibrahim, spent time remembering the Orthodox rabbi, educator, poet and a founder of the Gush Emunim movement, as a brother and friend.

During the event, several of Rabbi Froman’s young grandchildren from Tekoa, with large knitted kippas and long side curls come over to say hello to Sheikh Ibrahim. They gave the elderly man a hug and asked him how he was doing. “What a family!” Abu El-Hawa later exclaimed with his ready smile.

Dressed in traditional white robes and a red keffiyeh, Abu El-Hawa at age 72, continues to spread the message of peace and hope. Fourteen years ago, he retired from his job as an engineer at the Israeli phone company to devote his time to “breaking fences between people – my real profession,” explains Abu El-Hawa.

“My father taught me to love everyone – Muslim, Hindu, Jew, Christian – he was the key to my understanding of the world.”

Abu El-Hawa’s father himself was a guard at the Russian Orthodox Church in Jerusalem for 50 years. The Abu El-Hawa family resides on the Mount of Olives and has been living there according to Sheikh Ibrahim for the past 1,300 years.

During the memorial tribute, Hadassah Froman told the audience that when her husband had to undergo surgery, Sheikh Ibrahim traveled to the Ein Karem hospital to be with them. “We would both sit outside the operation room – I would recite the Psalms while Ibrahim would read the Koran,” she said.

“God gave Rabbi Froman a special gift to spread love between people and I believe that is what he is doing right now – connecting souls together in Heaven,” Sheikh Ibrahim told Tazpit. “Someday I will help him.”

“We are all sons of Abraham, although we have two different mothers – Sarah and Hagar – we are still one,” stresses Abu El-Hawa. “Rabbi Froman was one of those special people who understood this – may his memory be forever be blessed.”

“With people like Sheikh Ibrahim, we can work towards peace,” said Alumah, one of the attendees of the event, who identifies herself with the political right. “He and Rabbi Froman are individuals who know how to bridge and not divide.”

Leave a Reply to me Cancel reply