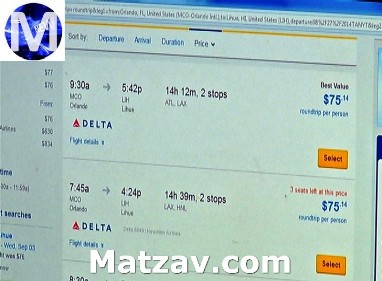 This Shabbos, some people will be giving a Kiddush – not for a baby, but because they got dirt cheap airline tickets.

It was Yom Tov in many frum homes and offices across the country this morning as a glitch with the Delta airlines reservation system resulted in some people getting very – very – cheap airfares.

Delta said the glitch caused incorrect fares for both its website and booking websites such as Expedia, Priceline and Travelocity to show incorrectly.

By 11:30 a.m., Delta.com and the Expedia and Priceline websites would show the low fares but when users went to pay they found a box that explained those $75 fares to Hawaii were now $806 round trip.

Delta released the following statement: “For a portion of the morning today, some prices on delta.com and other booking channels were incorrectly displayed, resulting in lower than usual fares for customers. The situation has been resolved and the correct prices are being displayed. Delta will honor any fares purchased at the incorrect price.”

Delta is not releasing details as to how or why the low fares were offered.