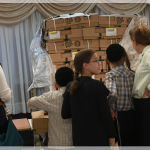 Secaucus, NJ…While most of the 400 booths at the recent Kosherfest show were offering samples of the food they manufacture or market, the booth of Mesamche Lev showed an empty table without any food, a snapshot of the conditions the organizations deals with in Israel and the US. Mesamche Lev serves over 100,000 individuals from over 11,000 families in Israel and the US. As well as 720 widowed and single parent families, including thousands of orphans.

The booth vividly portrayed a set Shabbos table without any food because for many this is a Shabbos meal. It also featured a display of shoes, a reflection of the organization’s program to distribute shoes to poor families. It showed a well-worn set of shoes and wondered out loud: “If their shoes look like this, can you imagine what they are eating?” Mesamche Lev was at Kosherfest to fulfill its mission of “putting food on every plate, shoes on every child’s feet, and joy in every heart of a poor person in Israel and to ease the unbearable stress on single parent homes in the US.”

Mesamche Lev was hoping that the kosher food community would rally to the cause of feeding the poor and the thankfully the response was overwhelming. It unveiled a corporate sponsor program for food. In a statement, Mesamche Lev noted: “We have learned that worn out shoes are also very much symptomatic of empty stomachs, which is often how we learn about hunger in so many families.” According to Israel’s Central Bureau of Statistics, 16% of Israelis or nearly 850,000 people live in poverty and two thirds of them are children. Mesamche Lev serves 11,000 families with their basic food necessities with a budget of over $6 million a year. This means putting food on the table and meat as a source of protein once in a while.

Mesamche Lev is especially active during Jewish holidays when it helps poor families with the basic necessities of celebrating the holidays. On Passover, when the needs are greatest, Mesamche Lev distributes a wide variety of Passover foods, including more than 100,000 lbs. of Matzoh.