Making a siyum is always a cause for celebration. How much more so when it’s a siyum on all of Shas. And how utterly amazing that occasion becomes when the mesayeim is a young man, Boruch, who came to Sinai Academy eight years ago from Minsk. Then it becomes an historic celebration.

An event like this happens rarely. And even when it does, we only hear about it or read about it in the news. But not this time. Now our community has the tremendous zechus of attending this siyum and seeing this miracle happen live. It’s an opportunity being offered by Sinai Academy. It’s also an opportunity that nobody should miss.

Sinai Academy is a yeshiva high school for immigrant boys with little or no knowledge of their Jewish heritage. At Sinai, the rabbeim take their talmidim under their wings, nurture them and introduce them to a life of Torah and Yiddishkeit. It’s not unusual for Sinai talmidim to continue to learn in yeshivos gedolos both in America and in Eretz Yisroel. Many even go on to become leaders or mentors to the next generation of Sinai students.

Tonight, Boruch will celebrate his siyum on the entire Shas and the community at large is invited to attend. The event will be held at the Renaissance Hall in Boro Park and is scheduled to begin at 8 p.m. The siyum is being sponsored by Raphael Herzka and family in memory of their father, Reb Yitzchok ben Reb Nosson z”l, who was deeply concerned about the plight of Russian Jewry. Sruly Schubert will serve as chairman. Shmuel Lefkowitz and Gabil Wallach will be co-chairmen. Birchas Hamazon is scheduled for 9:15, with zemiros led by Reb Abish Brodt.

Boruch’s story is truly amazing. He came to Sinai Academy in 2001 and began to develop a love for Torah learning and Yiddishkeit. Under the tutelage of his Sinai rabbeim, who nurtured him and encouraged him, he grew by leaps and bounds. After graduating Sinai, he learned in Yeshivas Tal Torah and then in Bais Shraga and Rav Shaye Treff’s yeshiva. Two years ago, Boruch got married and today he is an outstanding avreich in Bais Medrash Govoah in Lakewood, NJ. 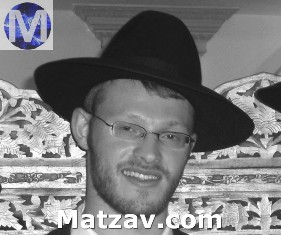 Boruch’s love for learning is all encompassing. So much so that he spent every precious moment in pursuit of his ultimate goal – a siyum on all of Shas. He learned for this siyum whenever he got a chance, during bein hasedorim and bein hazemanim. This was in addition to his regular full-time learning schedule. It was a relentless pursuit to achieve a lofty goal.

According to Boruch, he couldn’t have done it without Sinai Academy. It was at Sinai that he perfected his crucial learning skills and felt like a ben aliyah. He developed a strong kesher with his Sinai rabbeim, saying, “Step by step they worked on me and turned me into a true ben Torah.”

A large turnout of friends and well wishers is expected to join Boruch at the siyum, especially considering his background, and his amazing fortitude and perseverance. According to Nochum Dick, Chairman of the Board of Directors, “The Russian Jewish community may not appreciate the significance of Boruch’s achievement and the tremendous effort he invested in reaching his goal. But we do. That’s why it’s so important for us to attend this event, and to offer chizuk and encouragement to Boruch and his peers. We recognize the importance of what he has accomplished. For us, it is the ultimate expression of kavod haTorah.”

Boruch’s story is truly wonderful. But he is not alone. There are many Sinai students who are making great strides as they grow in Torah and Yiddishkeit. There are also many who, like Boruch, are living a true and genuine kollel life. One need only to take a quick look at the 9 volumes of “Oros Mei’ofel,” Sinai’s collection of chiddushei Torah by its own talmidim, to realize the great heights that can be attained. Also consider the dozens of students who are now learning in prestigious yeshivos and shteiging with their fellow talmidim. Some are teaching and being mekarev others.

History will unfold on April 1st, as Boruch makes his siyum. It will be a historic moment not just for Boruch, and not only for his proud rabbeim, teachers and fellow students at Sinai Academy, but for all of Klal Yistorel. Boruch’s celebration belongs to all of us.