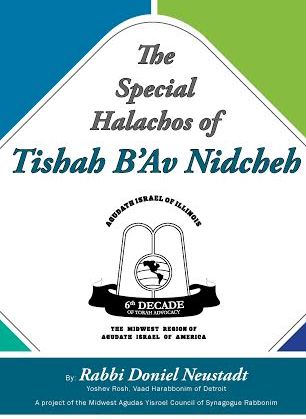 The ninth day of Av, the day on which both Batei Mikdash were destroyed, not only commemorates the destruction of both Temples, but is also a national day of mourning for all of the tragedies and calamities that have befallen the Jewish people. This sorrowful fast day, which culminates the Three Weeks period of mourning, is replete with special halachos. In this Discussion, we will review some of the special restrictions that apply to Tishah b’Av as well as the circumstances under which these restrictions do not apply:

Washing any part of the body is forbidden, even with cold water. Washing is permitted for…

Wearing leather shoes is forbidden, even if only part of the shoe is coated with leather.35 Leather shoes are permitted for…

Torah study is forbidden. Torah may be studied only…

1 Mishnah Berurah 554:11. See also Chayei Adam 135:2. A mere headache or minor discomfort, however, does not allow one to break his fast.

3 Aruch ha-Shulchan 554:8. Although Mishnah Berurah seems to rule that that from seven days after the birth it is proper to fast, contemporaryposkim tend to be lenient in their ruling since nowadays women are weak. When in doubt, consult a rav.

6 Some have the custom that children over the age of nine fast on the night of Tishah b’Av and for a few hours during the day to accustom themselves to fasting.

24 The poskim debate whether it is permissible to wash dishes on Tishah b’Av. Clearly, though, if the dirty dishes will attract insects, one may be lenient; see Pischei Teshuvah 554:22; Machazeh Eliyahu 87; Moadei Yeshurun, pg. 140.

35 But if the leather part is merely decorative and is not an integral part of the shoe, it is permitted; see Kaf ha-Chayim 554:75.

40 Tosfos Chayim on Chayei Adam 135:2; Yabia Omer 2:26, who quotes the Meiri, Moed Katan 21a, who allows a mourner to study sefarim that bring a person to repentance. (Rav C. Kanievsky is quoted (Rivevos Efrayim 1:386) as prohibiting studying sefarim which are based on pesukim and sayings of Chazal.)

43 To bless another person, such as to wish him mazal tov or refuah shleimah, is permitted.

47 O.C. 559:3. Some poskim hold that the stool should be lower than 12 inches, while others hold it is permitted to sit on any chair which is lower than a standard chair or bench; see Nechamas Yisrael, pg. 170, and Halichos Shelomo 3:15, Orchos Halachah 25, for the various views.