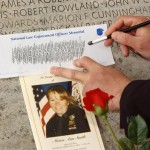 From the husband of an NYPD police officer who died on 9/11 comes an invitation to Sen. Ted Cruz.

“Senator Cruz, I was disappointed by your disparaging remarks about New York values somehow being different from Iowa and New Hampshire values,” read a Facebook post by retired NYPD Police Officer Jim Smith, husband of fallen Police Officer Moira Smith. “I invite you to come to the National 9-11 Memorial and Museum and see for yourself, and perhaps learn something about, the values of New Yorkers and the Heroes who defended American values on September 11th, 2001.”

The remarks in question accompanied Cruz’s suggestion that Donald Trump play “New York, New York” rather than “Born in the USA” at campaign rallies.

“Because Donald comes from New York and he embodies New York values,” Cruz then said.

Should Cruz now accept the invitation, he will see the name Moira Smith among those of hundreds of others who truly did embody New York values and therefore American values. A famous photograph taken on 9/11 shows Moira Smith leading a bleeding executive to safety from the South Tower.

The 38-year-old cop then returned to direst danger and is credited with saving hundreds of lives. Another surviving executive would remember the evenness of her voice and the steadiness of her eyes as she kept people moving when they otherwise would have frozen at the sight of the horrendous carnage in the plaza.

She was still there, urging others to safety, when the tower came down. Her 2-year-old daughter, Patricia, later accepted the NYPD Medal of Honor on her behalf and stood with the emerald green ribbon around her neck, the eight-pointed gold star hanging just above her knees.

Moira Smith’s battered shield, number 10467, was recovered from the ruins. Jim Smith would be sure to show it to Cruz on display along with her gun belt at the September 11 museum. Read more at the Daily Beast.