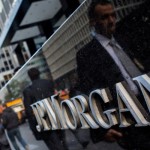 While it is not known how deep the hack was into the other firms, made up mainly banks and brokerage firms, it is believed that the hackers were operating from Russia, and have loose connections with officials of the Russian government. The identities of the institutions were not made known.