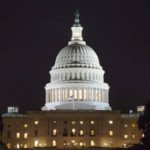 One way to measure that is in how much money the government spends. In a conversation Thursday, a Republican member of Congress mentioned that the military pay act, passed by Congress and signed by President Obama at the beginning of the shutdown, is actually a huge percentage of the government’s discretionary spending in any given year. And that is still flowing. So if you took that money, and added it to all the entitlement spending that is unaffected by a shutdown, plus all the areas of spending that are exempted from a shutdown, and added it all together, how much of the federal government’s total spending is still underway even though the government is technically shut down?

I asked a Republican source on the Senate Budget Committee for an estimate. This was the answer: “Based on estimates drawn from CBO and OMB data, 83 percent of government operations will continue. This figure assumes that the government pays amounts due on appropriations obligated before the shutdown ($512 billion), spends $225 billion on exempted military and civilian personnel, pays entitlement benefits for those found eligible before the shutdown (about $2 trillion), and pays interest costs when due ($237 billion). This is about 83 percent of projected 2014 spending of $3.6 trillion.”

So the government shutdown, at least as measured by money spent, is really a 17 percent government shutdown. Perhaps that is why the effects of the shutdown, beyond some of the most visible problems, like at the monuments and memorials on the Washington Mall, don’t seem to have the expected intensity. Seventeen percent of federal expenditures is still a huge amount of money, and the shutdown is affecting many people. But many more who are dependent on federal dollars are still receiving their money, either as salary, transfer payment, or in some other form. Viewed that way, it’s no wonder both Republicans and Democrats appear to believe they can last the shutdown out, at least for a couple of weeks until they try to resolve the debt limit crisis due to arrive October 17.