Thirty busloads of children and adults traveled this morning from Lakewood to Trenton to take part in the rally.

The bill, expected to be heard in a state Senate committee, would create a five-year pilot program allowing between 2,600 and 4,000 children to attend private school in its first year, at a cost of $24 million, increasing to 10,000 to 20,000 children and $120 million in year five. Funding would come from an “Opportunity Scholarship Fund,” created by corporations which receive tax credits equal to their contributions.

About 1,500 people – more than half from Lakewood – attended the hearing. The hearing turned into a rally when it was moved outdoors – for the first time ever – to accommodate the overflow crowd.

After testimony was heard from a dozen witnesses, including Rabbi Shlomo Katz representing the Igud Hamosdos of Lakewood and Rabbi Josh Pruzansky representing Agudas Yisroel of New Jersey, the Senators voted unanimously 6-0 in favor of the Bill.

The bill now moves to the full Senate, where it is expected to pass. 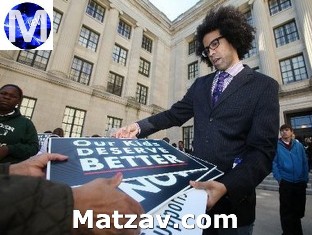 Sens. Raymond Lesniak (D-Union) and Tom Kean (R-Union), co-sponsors of th bill, said yesterday that they hope the legislation is passed into law by July 1 and can send children to school in September.

To qualify for the vouchers, a family must be earning less than 2.5 times the Federal Poverty level.

Rabbi Meir Hertz, who helped organize the rally said, “This is the milestone we’ve been davening for more than 20 years. We now have a Governor who is fully committed to School Choice and to real educational opportunities for every child in New Jersey, public and nonpublic. The Igud supported him for Governor, and he is standing by his principles.”