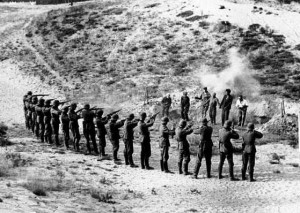 The Simon Wiesenthal Center’s top Nazi hunter said today that he has sent the German government a list of 80 individuals, believed to still be alive, who were involved in the rounding up and shooting of Jews during World War II.

Efraim Zuroff’s list is composed of 76 men and four women who were part of the Einsatzgruppen. The group was a mobile death squad made up of SS and policemen that carried out the first phase of the Holocaust by shooting more than a million Soviet Jews and tens of thousands of others by spring 1943.

“Almost every person in the Einsatzgruppen was a murderer, a hands-on murderer,” Zuroff said. Read more at the National Post.