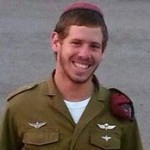 Sgt. Shachar Shalev, aged 20, a fighter in the elite Paratrooper Recon Unit, died this morning (Aug. 31) of wounds he incurred during Operation ‘Protective Edge’. Shachar is the 72nd Israeli casualty of the operation and the 66th soldier to fall.

Shalev was operating with his unit in Khan Yunis when it was hit by a road-side bomb on July 23rd. Three other soldiers were killed in the incident; Lieutenant Paz Eliyahu, 22, of Kibbutz Evron, Staff Sergeant Lee Matt, 19 of Eilat, and Staff Sergeant, Shahar Dauber, 20 of Kibbutz Ginegar. Shahar’s right leg had to be amputated because of his injuries one week ago. He fought a courageous battle to survive the severe wounds he incurred, but succumbed to them this morning.

Shalev, from Alonei HaBashan in the Golan Heights, is survived by his parents Shimon and Naomi, who were at his bedside throughout his medical battle of survival, and his five siblings. He is the first resident of Alonei HaBashan to fall during his service in the IDF.

Last week, Tazpit News Agency reported about a special platelet drive conducted for Shahar, who required a platelet transfusion daily. There was an overwhelming public response to the call.

Sgt. Natanel Maman, a 22-year-old IDF soldier who was critically wounded by shrapnel from a rocket that exploded next to Gan Yavneh in the Ashdod region, died of his wounds on Friday morning (Aug. 29) at the Beilinson Hospital in Petah Tikva. He was laid to rest at the Gan Yavneh cemetery the same day.