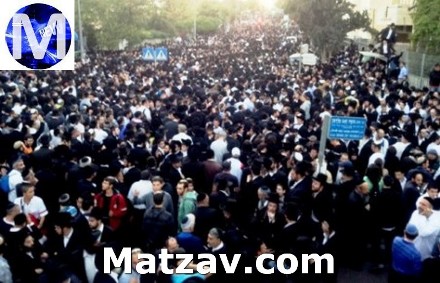 Israel Police spokesman Micky Rosenfeld says that there are more than 700,000 people taking part in the levaya of Chacham Ovadiah Yosef zt”l.

Over 4,000 police officers are in and around area of Yeshivat Porat Yosef, where the levaya was held, and now near the Sanhedria cemetery, where the kevurah is taking place.

Rosenfeld said this is likely the largest funeral in Israel’s history.

The crowds forced the closure of the entrance to Yerushalayim from the main highway. There were dozens of injuries and fainting spells and police were barely in control of the crowds.

It is estimated that one million people may pass through Yerushalayim for the levaya before the night is over, and that is estimated to be not long before midnight.

The aron of Rav Ovadia arrived at the cemetery shortly before 10 p.m., but police struggled to stop thousands from trying to come close to the gravesite.

Hundreds of people parked their cars in the middle of the street to reach the funeral procession and kevurah by foot.