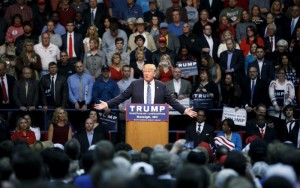 According to a new USA Today/Suffolk University poll, a clear majority of Donald Trump’s supporters say they would vote for him if he bolted the Republican Party for an independent run.

Not only does Trump continue to lead the GOP field, says the poll, but 68% of his backers would vote for him as an independent; just 18% say they wouldn’t. All others were undecided.

Trump boasted of the results with a Facebook post on Tuesday afternoon. Read more at USA Today.