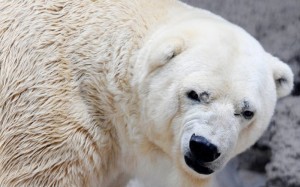 More than half a million signatures on a Change.org petition and pleas from Newt Gingrich and Katie Couric were not enough to  convince Argentina’s president to relocate a severely depressed polar bear named Arturo, who authorities worry is “going insane.”

The 28-year-old bear is the last remaining captive polar bear in the country, following the death of his partner, Pelusa, two years ago. Zoogoers began expressing concern for Arturo more than a year ago, citing unusually hot temperatures and only one small pool (that appears dirty in videos) for him to cool off in.

The Winnipeg Assiniboine Park Conservancy of Canada features a new polar bear conservation center where he could interact with other bears, but no such luck. Read more.