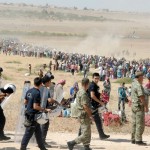 Around 60,000 people, mostly Syrian Kurds, crossed the border into Turkey on Friday and Shabbos out of fear of an ISIS attack, according to Turkey’s Deputy Prime Minister Numan Kurtulmus. Turkey opened its borders on Friday to Syrians fleeing the strategically placed Kurdish town of Kobane, which ISIS is believed to be approaching.

At least 11 Kurdish civilians, including boys, have been executed by ISIS in towns near Kobane, according to the Syrian Observatory for Human Rights. The number of Syrian refugees in Turkey has now topped more than 847,000. Read more.