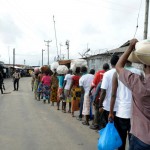 The Pentagon will be sending an additional 600 American troops to West Africa to help in the fight against Ebola, CNN reported on Friday. The troops will be there to provide engineering and logistics support. Roughly 200 troops are already there. They will not treat patients.

The U.S. has committed sending 3,000 troops to the region. In Dallas, four individuals close to the Ebola patient have been quarantined. So far, health officials are monitoring 100 people have been contacted due to potential interactions with the man, a dozen of which are being monitored.

The man’s apartment is being sanitized on Friday, even after health officials said they had a struggle finding a contractor that would agree to do the cleanup. Read more at CNN.