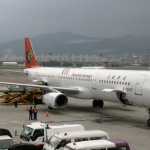 Flying in terrible weather as a result of Typhoon Matmo, pilots making a second attempt to land a plane on a small Taiwanese island today crashed, leaving 47 people dead, injuring 11, and multiple buildings on fire, according to the country’s transportation minister. Those injured have been taken to the hospital. No one in the buildings was hurt.

The flight was from Taipei, the capital, to the island of Penghu, which is halfway to the Chinese mainland.

The plane was reportedly operated by the Taiwanese airline TransAsia Airways, and had 54 passengers and four crew on board. Earlier reports based on a local fire department had 51 people dead in the crash. Read more.