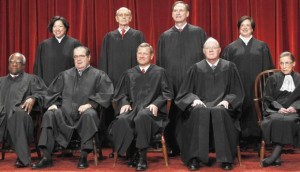 Justices Antonin Scalia and Anthony Kennedy, both born in 1936, will be 84—or two years older than Ginsburg is now—on inauguration day in 2021.

That means–if the current Supreme Court roster remains in place–six of the nine justices serving when the next presidential term expires will be at least 70 years old.