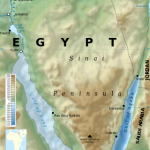 The decapitated bodies of four men were found in Egypt’s Sinai Peninsula, where the Egyptian military has been fighting jihadists over the past year.

The bodies were found by residents of Sheikh Zaveid, near Rafah, just two days after the men were abducted, AFP reported. Egyptian officials believe they were targeted for their ties to the Egyptian military.

An Egyptian security source told Al-Masry Al-Youm that those responsible for the murders were trying to imitate the methods of execution favored by the Islamic State.

Most of the terrorist attacks in the Sinai have been launched by the Al-Qaeda-linked group Ansar Bayt al-Maqdis, which was declared a terrorist organization by the U.S. earlier this year.

Similar Islamic State copycat groups also exist in the nearby Gaza Strip, where Islamic State and Al-Qaeda-linked terror groups have claimed to fire rockets on Israel and said that 13 of their fighters have been killed during Operation Protective Edge.