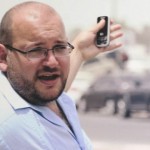 A plane carrying four Americans freed by Iran as part of a prisoner swap with the United States has taken off from Tehran.

The quartet, including Washington Post journalist Jason Rezaian, are heading to Switzerland before going on to a U.S. military hospital in Germany for medical treatment. The Post said Rezaian was accompanied by his wife, Yeganeh Salehi.

The group’s release was announced yesterday, just hours before Iranian and Western diplomats in Vienna announced implementation of a nuclear pact between Western powers and Iran.

Rezaian, an Iranian-American who served as the Post’s Tehran bureau chief, was arrested in 2014 on espionage charges and spent over 500 days in jail, despite pleas and protests by the U.S. government, the Post, family and friends.He was convicted on the espionage charges in a secret trial last year, but his sentence had never been disclosed.

Publisher Frederick Ryan released a statement saying the newspaper is “relieved that this 545-day nightmare for Jason and his family is finally over.”

The other three ex-detainees are Amir Mirzaei Hekmati, an Iranian-American and former U.S. Marine arrested in 2011 on spying charges while visiting his grandmother. The other two are Saeed Abedini, a Christian pastor imprisoned since 2012, and Nosratollah Khosravi-Roodsari, whose name had not been made public until yesterday.

Iran also freed a fifth American, student Matthew Trevithick, who had been detained for 40 days while in Iran for an intensive language program to increase his fluency in Dari, a language closely related to Farsi.Trevithick’s release was separate from the those of the other four Americans.

On the other side, U.S. President Barack Obama offered clemency to seven Iranians who have either been charged or convicted for violating U.S. trade sanctions against Iran. Three of them, Bahram Mechanic, Tooraj Faridi and Khosrow Afghani, are accused of exporting electronics to Iran. Nader Modanlo was convicted in 2012 for helping Iran to place its first-ever satellite into orbit in 2005.

Two other men, Arash Ghahreman and Ali Saboonchi, were each convicted in separate cases, while Nima Golestaneh pleaded guilty last month in connection with the hacking of a Vermont-based software company in 2012.

The Obama administration also agreed to drop charges against 14 other Iranians outside the country. None of them is in U.S. custody, and officials have determined that efforts to have them extradited will not succeed.

As part of the prisoner release, Iran agreed to try to determine the fate of ​, a former U.S. agent with the Federal Bureau of Investigation who disappeared there in 2007 while working on a project that has been linked to the CIA. U.S. officials have said they are not sure he is still alive, but said that Iran has “committed to continue cooperating with the United States to determine the whereabouts of . . . Levinson.”

The lengthy and complex negotiations with Iran about its nuclear program climaxed in an agreement announced last July, but there was no mention of the prisoners issue at the time. Obama and other senior U.S. officials have said they repeatedly demanded the release of Iran’s American prisoners, but there has been, nevertheless, widespread criticism of the administration for failing to secure a firm agreement on the prisoners’ release.