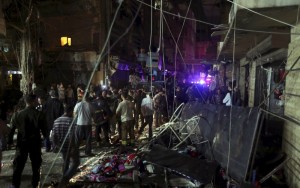 At least 37 people are dead in Lebanon after two suicide bombers exploded near a marketplace in Burj el-Barajneh, a southern suburb of Beirut.

At least 181 others were injured.

The BBC reports the neighborhood is a Hezbollah stronghold; Sunni militants have targeted the area because of their opposition to Hezbollah’s support for Syrian President Bashar al-Assad. ISIS claimed responsibility for the violence shortly after the incident. Read more at BBC.