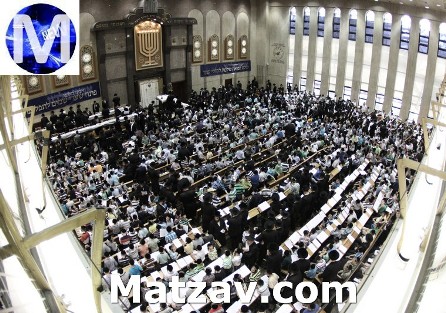 The walls of the magnificent Bobover bais medrash in Boro Park seemed to shake as thousands of children said a thunderous Shma Yisroel in unison at the conclusion of an emotional Asifas Tehilim for hundreds of cholei yisroel, including many children. Some 5000 children from 36 yeshivos participated in the recitation of tehilim as they watched the names of the cholim scroll in front of them on the third tier above the huge bais medrash.

The asifah, organized annually on Aseres Yemei Teshuvah by the highly-respected Misaskim organization, was by all accounts an emotion-filled tribute to Jewish unity as children from all segments of the Orthodox community participated as did children in such faraway places as Antwerp, Paris, London, Manchester, Mexico City, Toronto, Montreal, Buenos Aires and cities all over the United States who joined the asifa through a live hook-up. In addition, for the first time, the names of hundreds of cholim were scrolled on a large screen while the children were reciting the tehilim.

There was nary a dry eye as a yosom recited the kaddish, a reflection of the numerous tragedies that klal Yisroel faced this year, including Hurricane Sandy. As tehilim was being recited, many reflected on the many people who faced economic hardship, Jews who were incarcerated in prison in America and abroad with such a heavy toll on their families, and many other physical and spiritual challenges.

Although the asifa was to use the power of tefillah by the tinokos shel beis ribbon, many adults paused from their activities to recite Tehillim wherever they were at the time of the asifah. Many followed the proceedings on the Kol Mevaser telephone line and online on the Misaskim website.

As the children filed out, one could sense that they appreciated the magnitude of the event and the important role that they were playing. They occasionally glanced at the constant stream of names of cholim, understanding that they were being called on to  invoke rachmei shomayim. They were no doubt children but for a few hours, they felt as if they were the emissaries of an entire klal Yisroel.