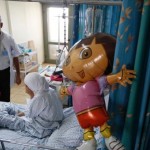 Three Syrian children wounded last night when a mortar shell struck a courtyard where they were playing were brought to the Rebecca Sieff Hospital in Tzefas, Israel, for medical treatment.

Sieff Hospital reported on Shabbos that the children were being treated in the emergency room and, following exams and x-rays, would be operated on. A total of 376 Syrians wounded as a result of their country’s civil war have received treatment at the Israeli hospital.