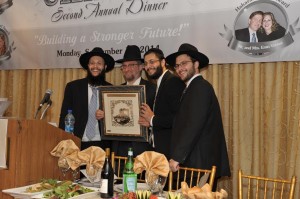 Leonard’s of Great Neck was packed wall-to-wall Monday night when more than 600 people came together to show their support for Chazaq, one of fastest growing kiruv (outreach) organizations in the United States. Originally founded in 2006 as a humble distributor of a weekly parsha sheet, Chazaq has grown exponentially and now runs the full gamut of Jewish outreach, including but not limited to: a family-oriented magazine, youth groups, educational programs (including classes for men, women, and teens, as well as one-on-one learning opportunities), special community events, and even a matchmaking service! They also still do the parsha sheet.

Most notably, Chazaq has made a name for itself in its work with at-risk youth, particularly the children of immigrants from the former Soviet Bloc, enrolled in public schools and susceptible to a variety of negative influences that have led so many astray from their Jewish roots. Chazaq is in many ways the last line of defense between Jewish youth in Queens and the loss of their spiritual and cultural identity-a recurring theme in the evening’s presentations, and a fact of which the organization’s supporters are keenly aware.

“Chazaq is a major deterrent to prevent further assimilation in the Jewish community,” said Dr. Paul Brody, a member of the dinner committee and one of last year’s Israel Leadership Award honorees.

Brody noted that he and his wife Drora were proud to serve as a “bridge” between the Ashkenazic and Sephardic Jewish communities. Indeed, one of the noteworthy aspects of the evening was the diversity of the attendees. As Chazaq founder Rabbi Ilan Meirov declared to the audience, the “secret” of Chazaq’s success is that “we don’t care what your background is. We could not care less if you’re Sephardi or Ashkenazi, Lubavitch or Satmar, Bukharian, or Persian, or Moroccan … it makes absolutely no difference to us.” It was unclear whether this was simply a reflection of Chazaq’s organizational philosophy, or if Rabbi Meirov might have been hinting to a possible expansion of the outreach group’s scope of operations.

It was a testament to Chazaq’s impact on the community that dinner attendees included an impressive roster of dignitaries, among them leading political, spiritual, and business figures. Elected officials in attendance included Borough President Melinda Katz-one of the evening’s presenters who, at Chazaq’s annual Big Event six months ago issued a special proclamation, declaring March 30th to be “Chazaq Day” in the Borough of Queens. Also, State Assembly Members Michael Simanowitz (D-27) and David Weprin (D-23), who referred to Chazaq as a “tremendous asset” to the community. Also making an appearance was former NY/NJ Port Authority Commissioner and current republican congressional candidate Bruce Blakeman, who showed himself an astute observer of Jewish communal dynamics. Blakeman, whose previous political credentials include serving as presiding officer and majority leader of the Nassau County Legislature, and who recently returned from a fact-finding trip to Israel, was impressed by what he saw.

“It’s very important that  we support organizations that … work hard to provide services to the community,” said the congressional hopeful in a private interview, “and a lot of the people that they service want their services delivered in this way: in a spiritual, religious setting with people who understand their customs and their values.

“Chazaq is a great organization, and it’s a privilege for me to be here,” he added.

As it turns out, Chazaq has friends in high places outside the United States as well. Bridging the gap between political and spiritual leaders was Israeli MK Rabbi Nissim Ze’ev. Ze’ev, perhaps best known as one of the founders of the highly-influential Shas Party. Ze’ev was honored on Monday night with Chazaq’s Israel Leadership Award.

And as Chazaq continues to attract civic-minded donors from all walks of life, it continues to reach the community in new ways. The organization recently branched out into the medium of Internet radio. Several people affiliated with the project were at the dinner, including the station’s director David Netkin, as well as hosts Deborah “Dr. Deb” Hirschhorn of the program “Parents & Kids,” and Bracha Melzer, whose “Weekly Forum” covers a wide range of topics of Jewish communal interest. Netkin tells us that in addition to talk radio, they station offers Jewish music at all times of the day. “We even have a smartphone app coming out soon,” he proudly announces.