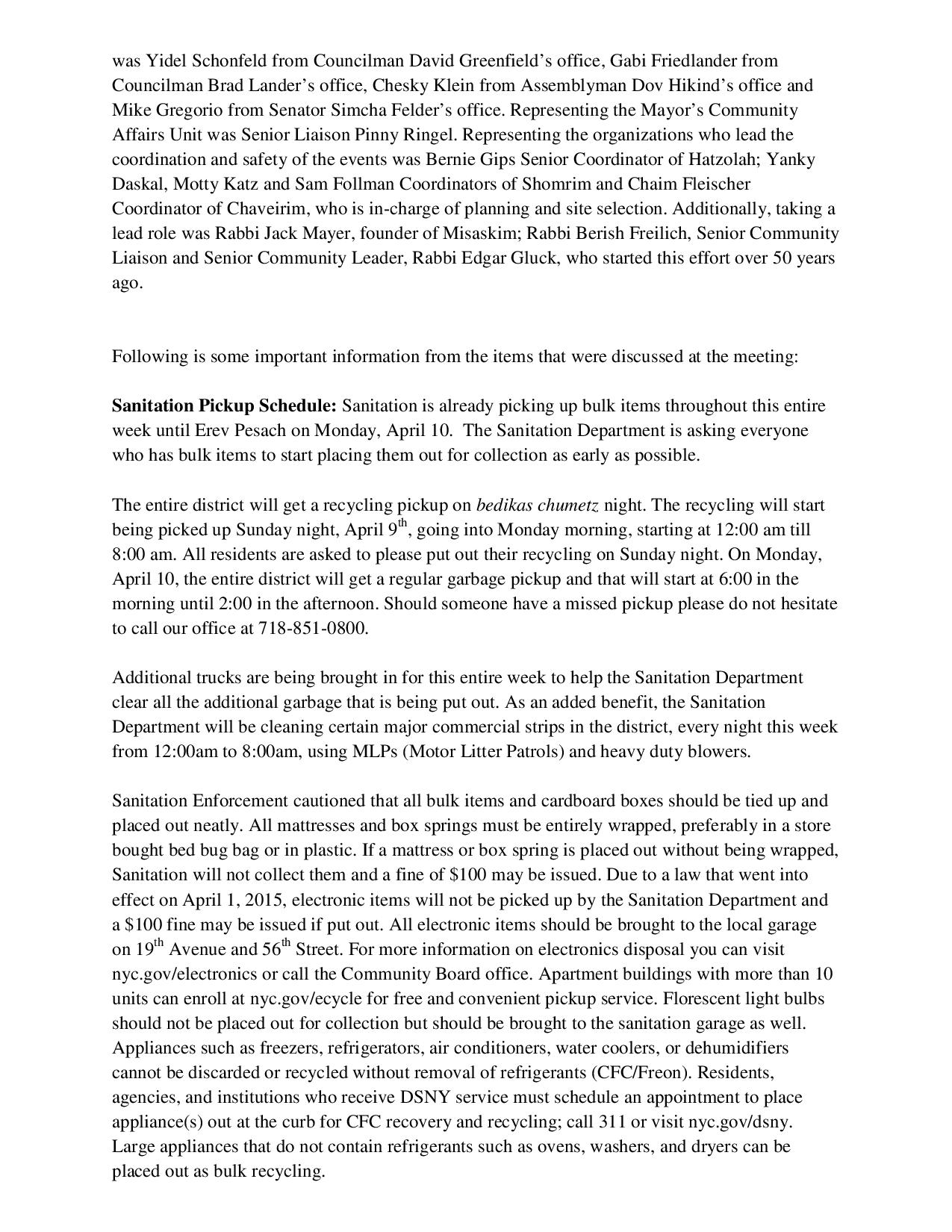 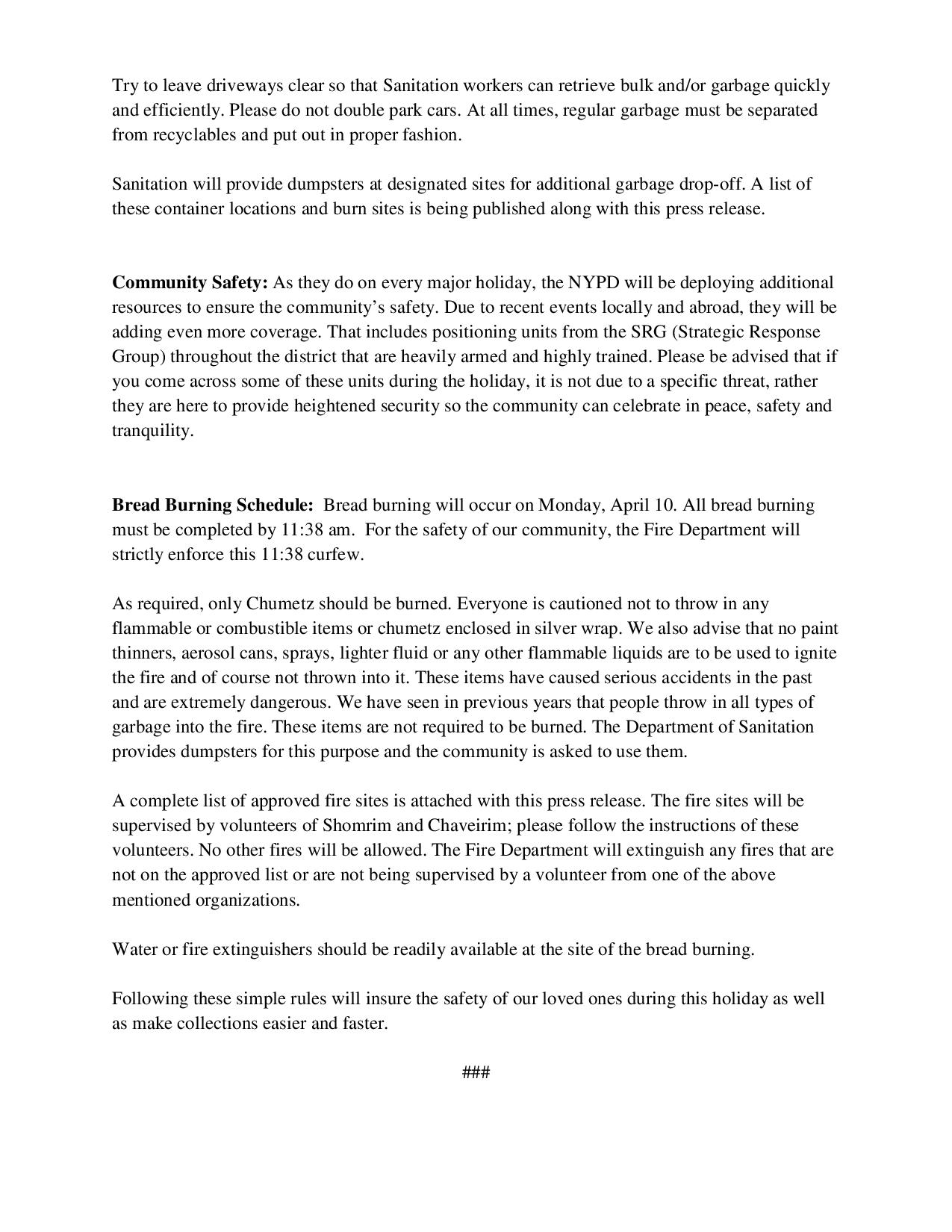 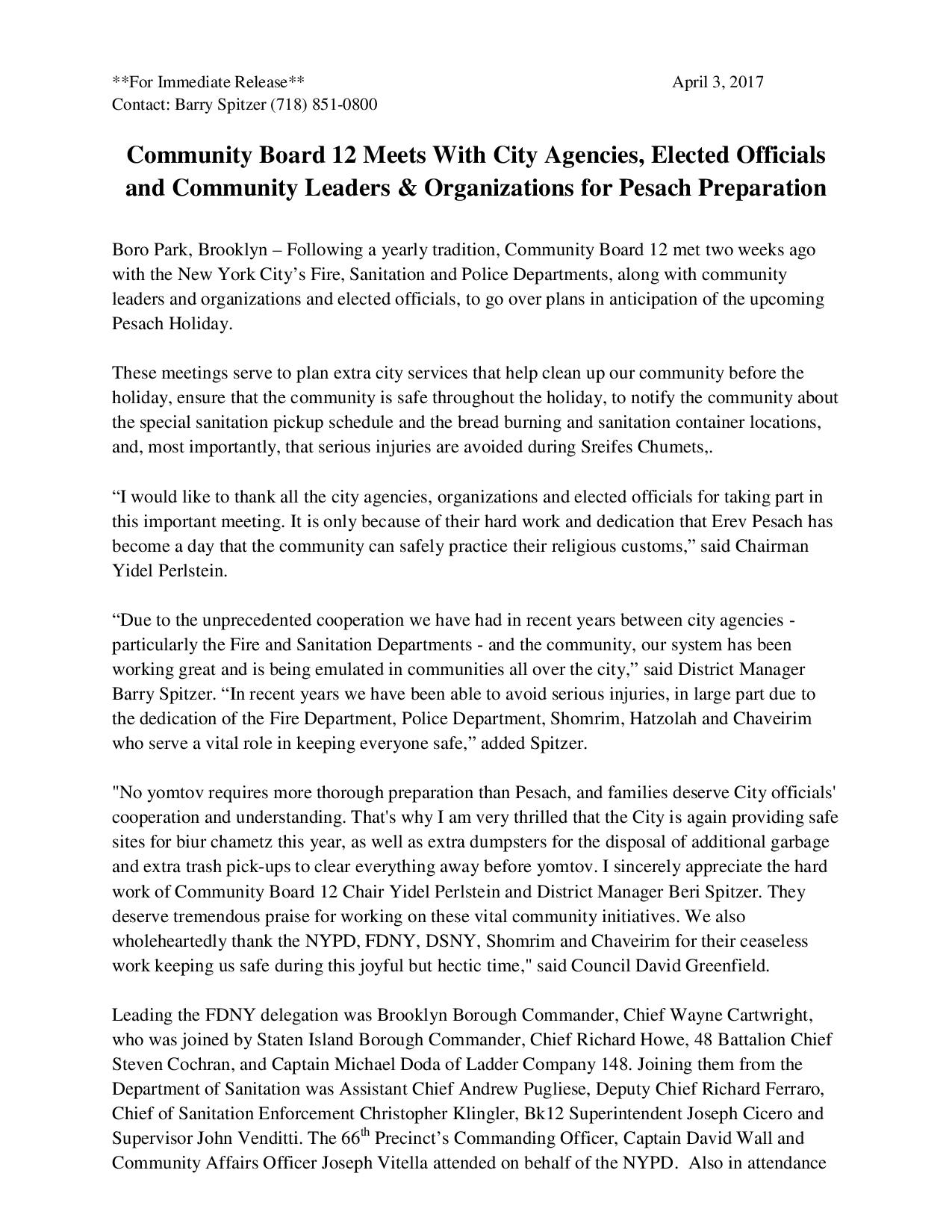 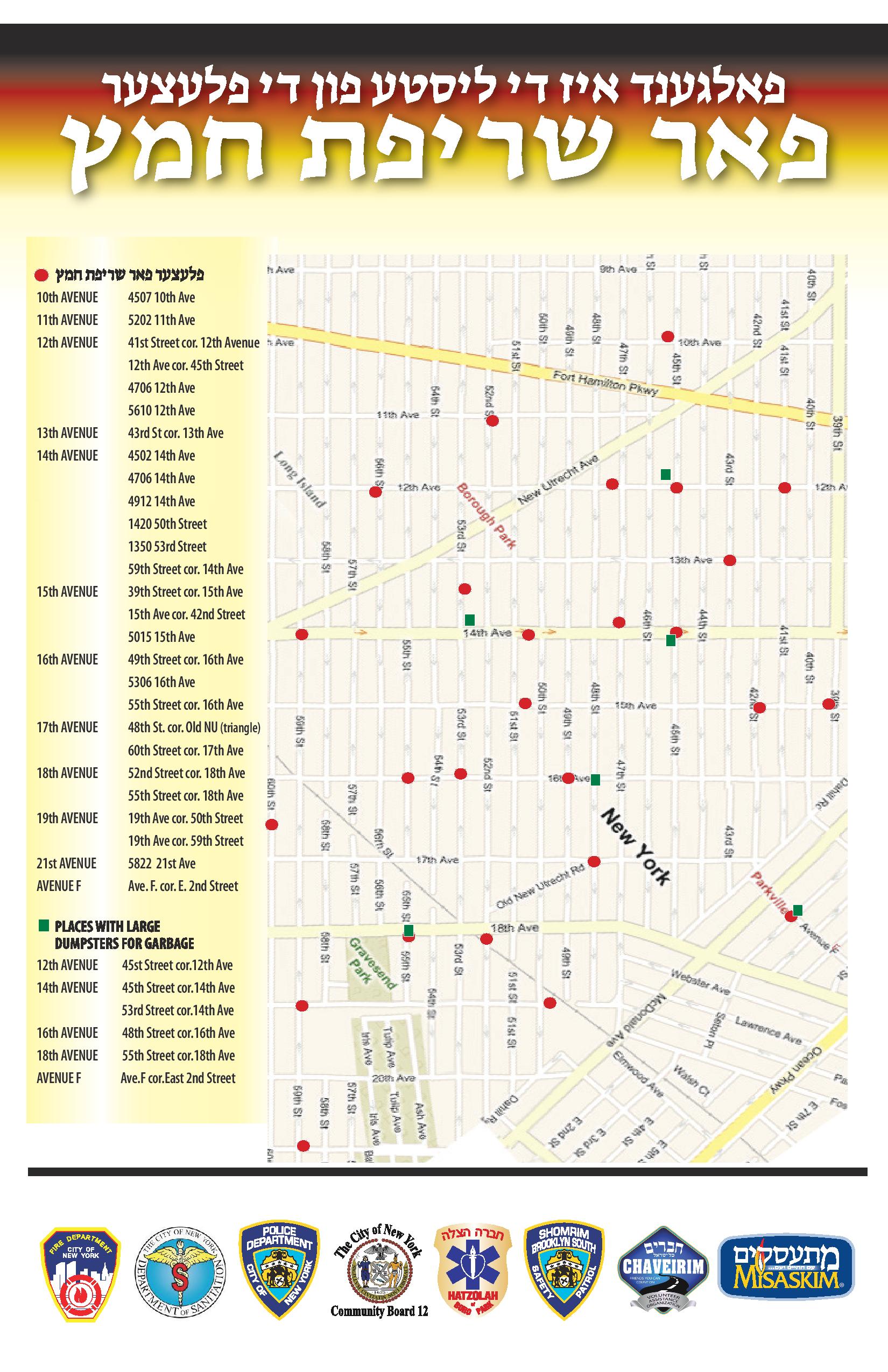 Boro Park, Brooklyn – Following a yearly tradition, Community Board 12 met two weeks ago with the New York City’s Fire, Sanitation and Police Departments, along with community leaders and organizations and elected officials, to go over plans in anticipation of Pesach.

These meetings serve to plan extra city services that help clean up our community before the holiday, ensure that the community is safe throughout the holiday, to notify the community about the special sanitation pickup schedule and the bread burning and sanitation container locations, and, most importantly, that serious injuries are avoided during sereifes chometz.

“I would like to thank all the city agencies, organizations and elected officials for taking part in this important meeting. It is only because of their hard work and dedication that Erev Pesach has become a day that the community can safely practice their religious customs,” said Chairman Yidel Perlstein.

“Due to the unprecedented cooperation we have had in recent years between city agencies – particularly the Fire and Sanitation Departments – and the community, our system has been working great and is being emulated in communities all over the city,” said District Manager Barry Spitzer. “In recent years we have been able to avoid serious injuries, in large part due to the dedication of the Fire Department, Police Department, Shomrim, Hatzolah and Chaveirim who serve a vital role in keeping everyone safe,” added Spitzer.

“No yomtov requires more thorough preparation than Pesach, and families deserve City officials’ cooperation and understanding. That’s why I am very thrilled that the City is again providing safe sites for biur chametz this year, as well as extra dumpsters for the disposal of additional garbage and extra trash pick-ups to clear everything away before yomtov. I sincerely appreciate the hard work of Community Board 12 Chair Yidel Perlstein and District Manager Beri Spitzer. They deserve tremendous praise for working on these vital community initiatives. We also wholeheartedly thank the NYPD, FDNY, DSNY, Shomrim and Chaveirim for their ceaseless work keeping us safe during this joyful but hectic time,” said Council David Greenfield.

Following is some important information from the items that were discussed at the meeting:

Sanitation Pickup Schedule: Sanitation is already picking up bulk items throughout this entire week until Erev Pesach on Monday, April 10.  The Sanitation Department is asking everyone who has bulk items to start placing them out for collection as early as possible.

The entire district will get a recycling pickup on bedikas chumetz night. The recycling will start being picked up Sunday night, April 9th, going into Monday morning, starting at 12:00 am till 8:00 am. All residents are asked to please put out their recycling on Sunday night. On Monday, April 10, the entire district will get a regular garbage pickup and that will start at 6:00 in the morning until 2:00 in the afternoon. Should someone have a missed pickup please do not hesitate to call our office at 718-851-0800.

Sanitation Enforcement cautioned that all bulk items and cardboard boxes should be tied up and placed out neatly. All mattresses and box springs must be entirely wrapped, preferably in a store bought bed bug bag or in plastic. If a mattress or box spring is placed out without being wrapped, Sanitation will not collect them and a fine of $100 may be issued. Due to a law that went into effect on April 1, 2015, electronic items will not be picked up by the Sanitation Department and a $100 fine may be issued if put out. All electronic items should be brought to the local garage on 19th Avenue and 56th Street. For more information on electronics disposal you can visit nyc.gov/electronics or call the Community Board office. Apartment buildings with more than 10 units can enroll at nyc.gov/ecycle for free and convenient pickup service. Florescent light bulbs should not be placed out for collection but should be brought to the sanitation garage as well. Appliances such as freezers, refrigerators, air conditioners, water coolers, or dehumidifiers cannot be discarded or recycled without removal of refrigerants (CFC/Freon). Residents, agencies, and institutions who receive DSNY service must schedule an appointment to place appliance(s) out at the curb for CFC recovery and recycling; call 311 or visit nyc.gov/dsny. Large appliances that do not contain refrigerants such as ovens, washers, and dryers can be placed out as bulk recycling.

Try to leave driveways clear so that Sanitation workers can retrieve bulk and/or garbage quickly and efficiently. Please do not double park cars. At all times, regular garbage must be separated from recyclables and put out in proper fashion.

Sanitation will provide dumpsters at designated sites for additional garbage drop-off. A list of these container locations and burn sites is being published along with this press release.

Community Safety: As they do on every major holiday, the NYPD will be deploying additional resources to ensure the community’s safety. Due to recent events locally and abroad, they will be adding even more coverage. That includes positioning units from the SRG (Strategic Response Group) throughout the district that are heavily armed and highly trained. Please be advised that if you come across some of these units during the holiday, it is not due to a specific threat, rather they are here to provide heightened security so the community can celebrate in peace, safety and tranquility.

Bread Burning Schedule:  Bread burning will occur on Monday, April 10. All bread burning must be completed by 11:38 am.  For the safety of our community, the Fire Department will strictly enforce this11:38 curfew.

As required, only Chumetz should be burned. Everyone is cautioned not to throw in any flammable or combustible items or chumetz enclosed in silver wrap. We also advise that no paint thinners, aerosol cans, sprays, lighter fluid or any other flammable liquids are to be used to ignite the fire and of course not thrown into it. These items have caused serious accidents in the past and are extremely dangerous. We have seen in previous years that people throw in all types of garbage into the fire. These items are not required to be burned. The Department of Sanitation provides dumpsters for this purpose and the community is asked to use them.

A complete list of approved fire sites is attached with this press release. The fire sites will be supervised by volunteers of Shomrim and Chaveirim; please follow the instructions of these volunteers. No other fires will be allowed. The Fire Department will extinguish any fires that are not on the approved list or are not being supervised by a volunteer from one of the above mentioned organizations.

Water or fire extinguishers should be readily available at the site of the bread burning.

Following these simple rules will insure the safety of our loved ones during this holiday as well as make collections easier and faster.