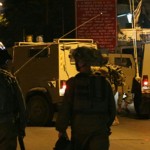 It was cleared for publication on Tuesday that Israeli security forces had arrested 24 high-ranking Hamas activists in Qalqilya in the West Bank. The terror activists were arrested in the framework of a comprehensive operation conducted by the Shin Bet, the IDF and the Israel Police.

The activists had been plotting to carry out terror attacks in Israel. The security forces estimate that their activities were funded by Hamas in Gaza and Qatar in attempts to reestablish the organization’s activity in Qalqilya and in neighboring villages.

Among the activists arrested are high-ranking Hamas officials that had served time in the Israeli prison. In addition to the arrests made, the security forces also confiscated over 35 thousand shekels allegedly allocated to the organization’s activities. The arrests expose Hamas’ ongoing activity in Gaza and abroad.