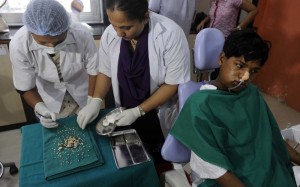 The swelling in a teenage Indian boy’s jaw baffled doctors until an operation revealed he had grown 232 teeth in a single gum.

The operation took seven hours and is considered a world record (the most teeth discovered in a previous operation was 37).

Doctors say they had to use a hammer and chisel to crack open the infected area, which was described as like “a benign tumor.” Read more and see photos at the BBC.