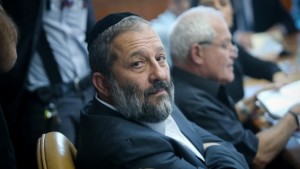 Cabinet ministers are expected to approve the appointment of Shas party leader Aryeh Deri as Israel’s new interior minister, a post from which Deri resigned in September 1993 to face charges of corruption.

Deri eventually served three years in prison beginning in 2000, forcing him out of politics for an additional seven years after the sentence under “moral turpitude” laws for convicted politicians.

Over 22 years after that resignation, the former wunderkind of Israeli politics, who first became interior minister at the age of 29, returns as the head of the party he co-founded with Rav Ovadia Yosef.

Deri will keep his current portfolio, the Ministry of Negev, Galilee and the Periphery, which he took after quitting the post of economy minister in November over the controversial natural gas reform being advanced by Prime Minister Bibi Netanyahu. Deri refused to use the economy minister’s legal powers to approve the deal, but promised Netanyahu he “won’t stand in its way,” eventually leading to Deri’s resignation and Netanyahu himself assuming the position.

Many pundits interpreted Deri’s acceptance of the Negev, Galilee and Periphery Ministry as a stop-gap position before a more senior post could be arranged for the leader of a coalition-member party.

With the resignation last month of interior minister Silvan Shalom, the Interior Ministry post opened up, launching a brief but frenetic jockeying for the post among Likud lawmakers, including Culture Minister Miri Regev and Knesset Foreign Affairs and Defense Committee Chairman MK Tzachi Hanegbi. Netanyahu, however, soon informed Deri the post would be his.

Netanyahu asked for a legal opinion from Attorney General Yehuda Weinstein to ensure there were no legal impediments to Deri’s appointment. That approval came last week, clearing the way for the expected cabinet vote to approve the new minister, followed by a Knesset vote later this week to confirm.