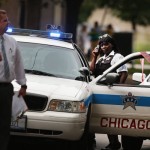 Chicago – A 10-year-old girl may be braindead after a stray bullet fired into her home and hit her in the head around 9:35 p.m. on Friday. A 12-year-old was shot in the same neighborhood when she, a 33-year-old woman and a 44-year-old man were approached by someone they didn’t know who fired at them.

It’s been a bloody month for the city-over the long Fourth of July weekend alone, another 82 gunshot victims were reported. Read more at the Chicago Tribune.

Leave a Reply to US Cancel reply