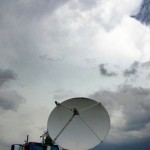 According to national weather data released today, 2015 was the second-warmest year on record for the contiguous United States.

With an average temperature of 54.4 degrees Fahrenheit, the year 2015 averaged 2.4 degrees above the 20th-century average, and was only 0.9 degrees below 2012, the warmest year on record.

Additionally, the data revealed, every U.S. state in 2015 was warmer than their 20th-century average, and it was the hottest December ever for the contiguous states. Read more at NOAA.