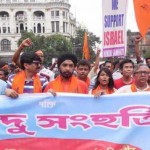 In what is being called by organizers the biggest pro-Israel, anti-terrorist rally in recent years, an estimated 20,000 gathered in India on Shabbos in a show of solidarity with Israel.

Protesters holding pro-Israel banners marched through the streets of Kolkata, while community heads delivered speeches proclaiming Israel’s right to defend itself against Hamas.

Protesters held banners stating “Hindus and Jews – united against terrorism.” Sikhs and Buddhists participated in the rally as well.