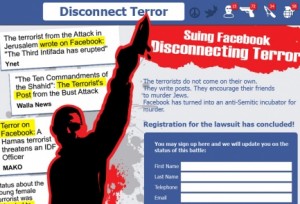 The Shurat HaDin – Israel Law Center on Tuesday submitted a lawsuit against Facebook in a New York court on behalf of 20,000 Israelis, with the plaintiffs claiming that the social media platform is facilitating incitement against Israelis.

At the onset of the current wave of Palestinian terror, Shurat HaDin, which works to fight terrorism on the legal front, began a petition to recruit thousands of Israelis under the title “Suing Facebook — Disconnecting Terror.”

The organization is asking the New York court to issue an injunction against Facebook to remove the inciting pages, monitor the methods of incitement and block them, and hold Facebook responsible for allowing terrorists on its network.

As one example of incitement, Shurat HaDin cited the case of 19-year-old terrorist Muhannad Halabi, who wrote on his Facebook page, “I want to become a martyr,” prior to carrying out a stabbing attack the following day. Halabi stabbed Aharon Bennett and Rabbi Nechemia Lavi to death.