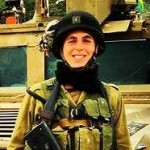 Police estimate that more than 20,000 people on Monday attended the levaya in Haifa of Sgt. Sean Carmeli from the United States, a Golani fighter who was killed in the Gaza Strip earlier this week.

The American killed in fighting in the Gaza Strip followed in the footsteps of scores of Jews from around the world who have volunteered to fight for Israel.

Israel calls them the lone soldiers: They are men and women in the prime of their lives who have left their parents and often comfortable lives behind in places like Sydney, London, Los Angeles and elsewhere to join the Israel Defense Forces, marching in the desert and taking up arms to defend the Jewish state.

There are about 2,000 lone soldiers currently serving in the military, said Marina Rozhansky, spokeswoman at the Israel Consul General in Los Angeles.

Sean Carmeli divided his life between Texas and the Israeli city of Ra’anana, where he studied at an immigrants’ class at a local high school.